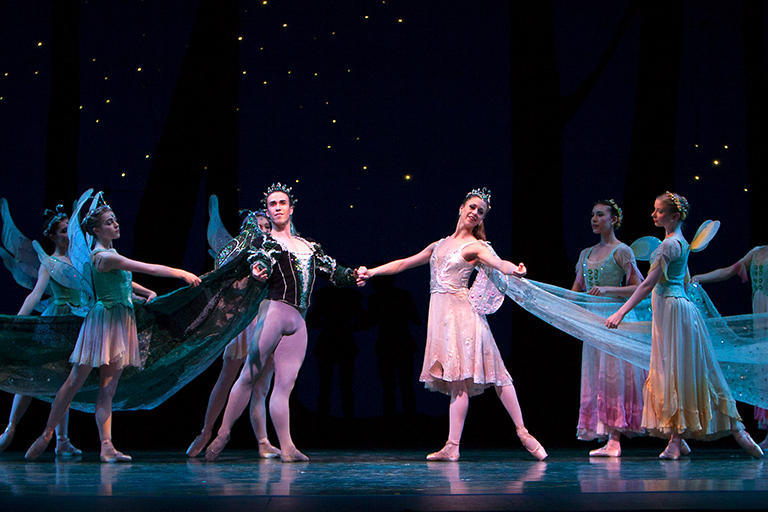 The Story of A Midsummer Night’s Dream

The Story of A Midsummer Night’s Dream

Shakespeare and Balanchine's Beloved Story of Love in All Its Complicatedness

A FOREST NEAR ATHENS, ONE MIDSUMMER EVE

The First Act takes place in a forest near the duke’s palace. Oberon and Titania, King and Queen of the Fairies, quarrel over the changeling child they both want. Oberon orders Puck to bring the flower pierced by Cupid’s arrow (which causes anyone coming under its influence to fall in love with the first person the eyes behold) and, while Titania is asleep and unknowing, he casts the flower’s spell over her.

Meanwhile, Helena, wandering in the woods, meets Demetrius, whom she loves but who does not love her. Demetrius rejects her and goes his way. Oberon watches and tells Puck to use the flower on Demetrius that he may return Helena’s affection.

Another couple, Hermia and Lysander, very much in love, are also wandering in the forest. They become separated. Puck, eager to carry out Oberon’s orders, mistakenly anoints Lysander. Helena appears, and Lysander, under the flower’s spell, at once and to her amazement tells her how much he loves her.

Hermia now returns. She is astonished and then dismayed to see Lysander paying attention only to Helena. Puck manages to bring Demetrius, too, under the flower’s spell, much to the delight of Helena, who doesn’t care for Lysander at all.

Demetrius and Lysander, now both in love with Helena, begin to quarrel over her. Puck, at Oberon’s order, has separated Bottom, a weaver, from his companions and transformed his head into that of a donkey and placed him at the sleeping Titania’s feet. Awakening, Titania sees Bottom, thinks him fair, and pays him close and loving attention. At last Oberon, his anger over, has Bottom sent away and releases Titania from her spell.

Hermia now gets no attention, Helena too much. The men, completely at odds, quarrel seriously and begin to fight. Puck, by his magic, causes them to separate, lose one another and wander apart in the forest until, exhausted, they fall asleep, with Puck arranging for Helena to fall asleep beside Demetrius and Lysander (his spell removed) by Hermia.

The Duke and Hippolyta discover the leaders asleep in the forest, awaken them, find their differences resolved and proclaim a triple wedding for themselves and the two couples.

AT THE COURT OF THESEUS

The Second Act opens in the Duke’s palace with parades, dancing, and divertissements in honor of the newly married couples. When the celebrations are over and the mortals retire, we return to the domain of Oberon and Titania, who are now reunited and at peace. And at last, Puck, having put order into disorder, sweeps away the remnants of the night’s doings. The fireflies twinkle in the night and reclaim the forest.

Reprinted from 101 Stories of the Great Ballets, by George Balanchine and Francis Mason