About Christopher Wheeldon’s Bound To

About Christopher Wheeldon’s Bound To

What happens to us when we’re tucked behind our screens?

The curtain rises on Christopher Wheeldon’s new ballet, Bound To©, to reveal the dancers mesmerized by their cellphones. For viewers the moment of recognition is instantaneous—we are bound to technology. In this ballet, Wheeldon comments on what happens to us when we’re tucked behind our screens. “It’s a false sense of safety because you’re not actually with someone; the screen is like a shield,” he says. When we let the world rush by unnoticed, “we’re not seeing the beauty in life.” On the flip side, he’s addressing what we can achieve when we’re together—when we see, acknowledge, and interact without any screens to shield us.

Wheeldon recognizes that he is as bound to technology as anyone else. “I read a really interesting article in The Atlantic about how teenage culture is changing,” he says, adding that when he was a kid, “you couldn’t wait to get out of the house to meet your friends and socialize.” No more. Last year, on vacation, he saw kids and their parents hunkered down with cell phones or iPads instead of talking to each other, and he realized that he wanted to make a ballet about “this lack of connectivity, the way that technology is shifting our instincts for community and social interaction,” he says. “It’s not like we’re at a point where we’re not relating to one another at all, but I think it’s definitely heading in a bit of a scary direction.”

To help him convey his ideas, Wheeldon chose music by British composer Keaton Henson. They had worked together on a project for Ballet Boyz, which paired choreographers and composers in a 14-day creative process. Wheeldon says Henson’s music has a “grounded, real, human aspect—I love that in his music there’s always a child laughing, or the birds, or traffic.” In the ballet, these sounds amplify the idea that while we’re busy texting or scrolling through social media pages, the sights and sounds of daily life are going on—and we don’t notice. 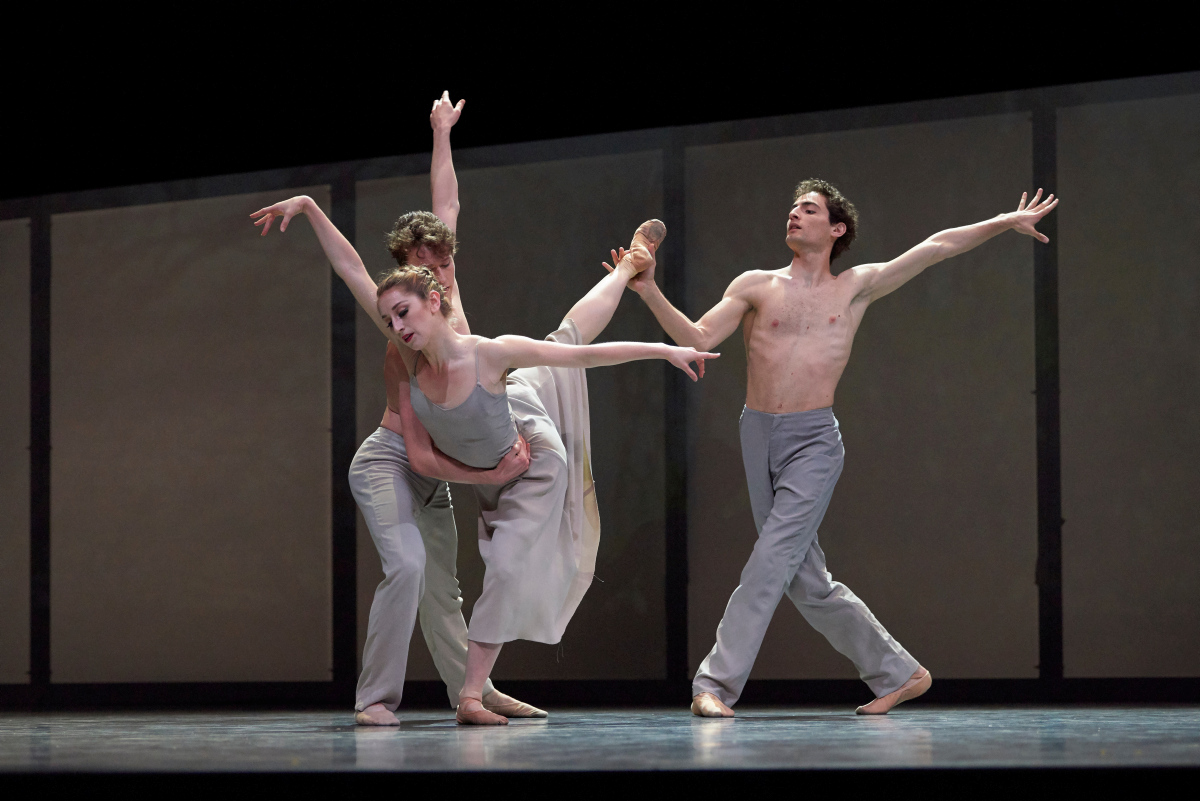 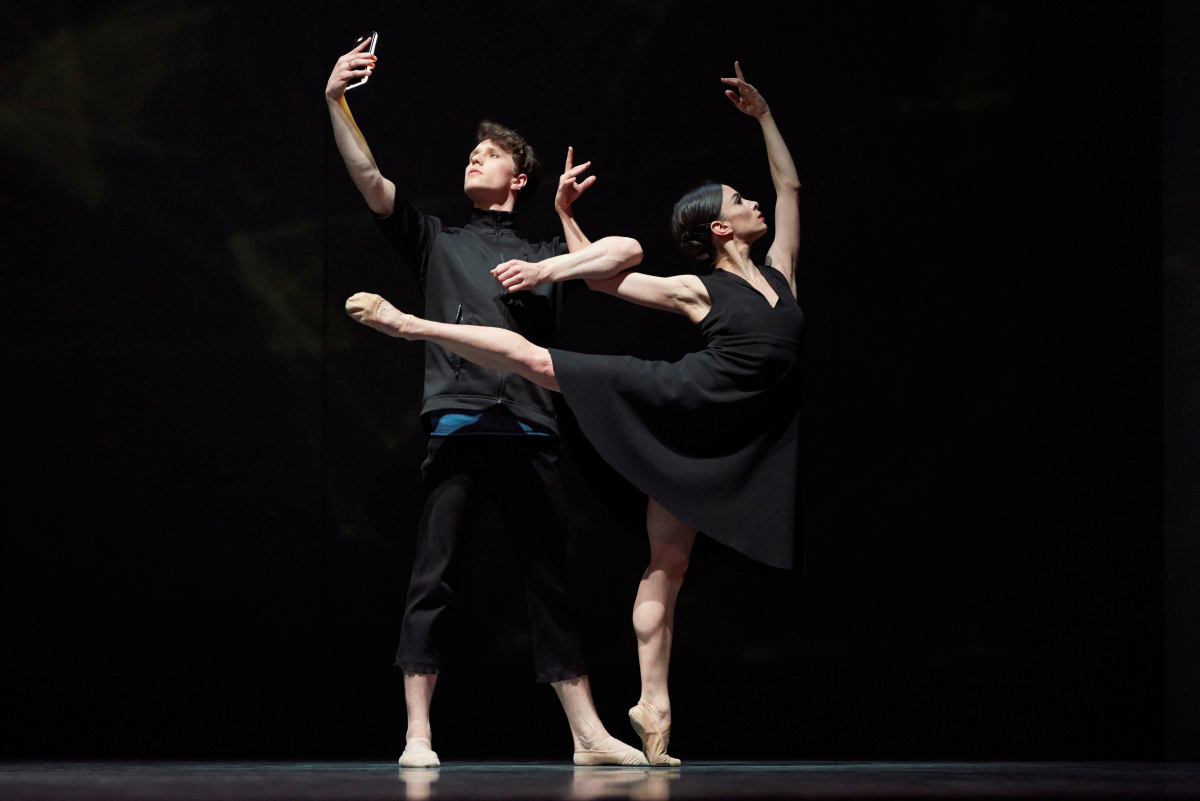 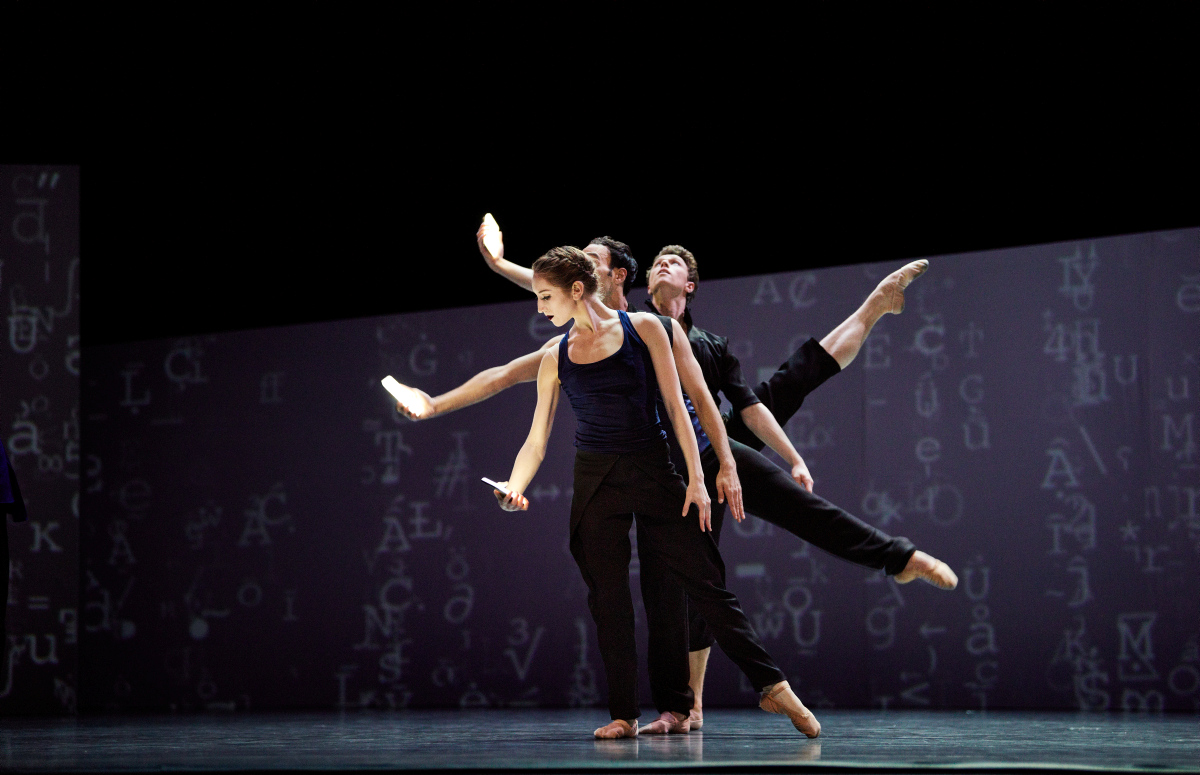 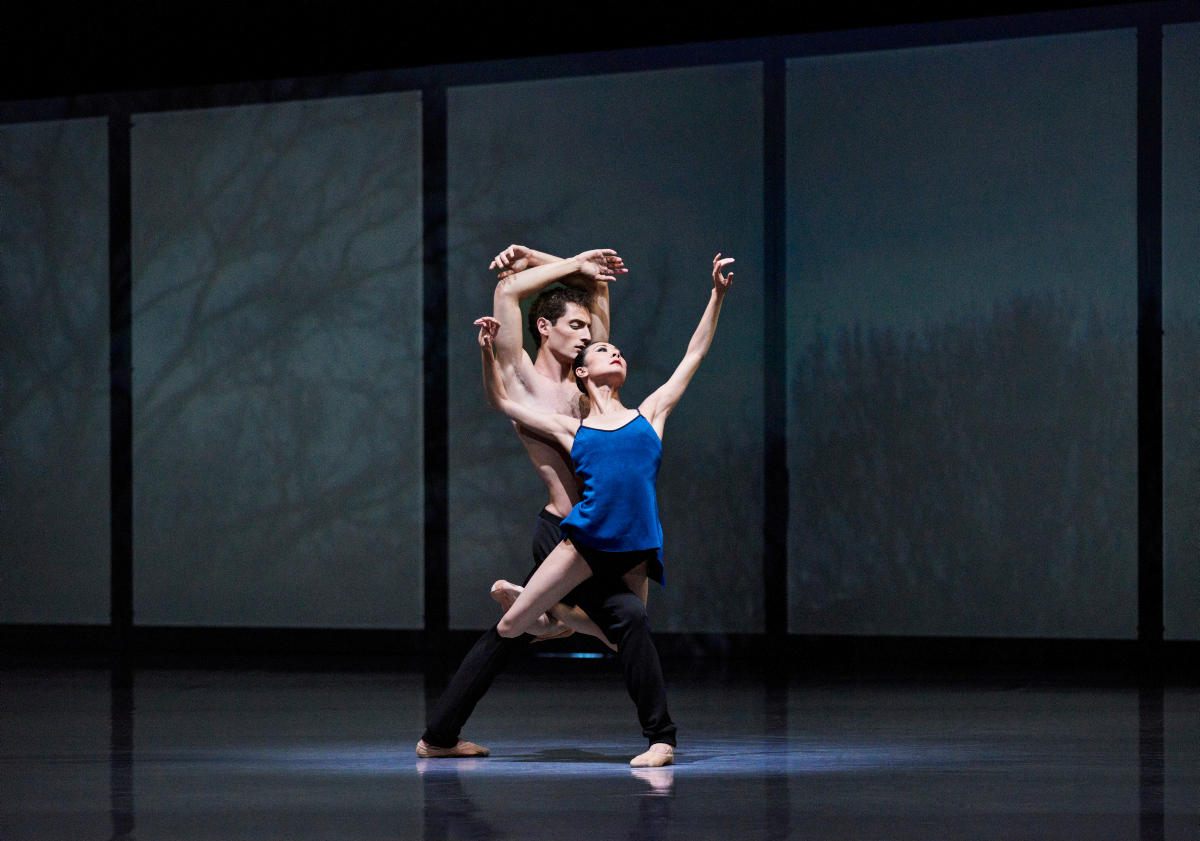 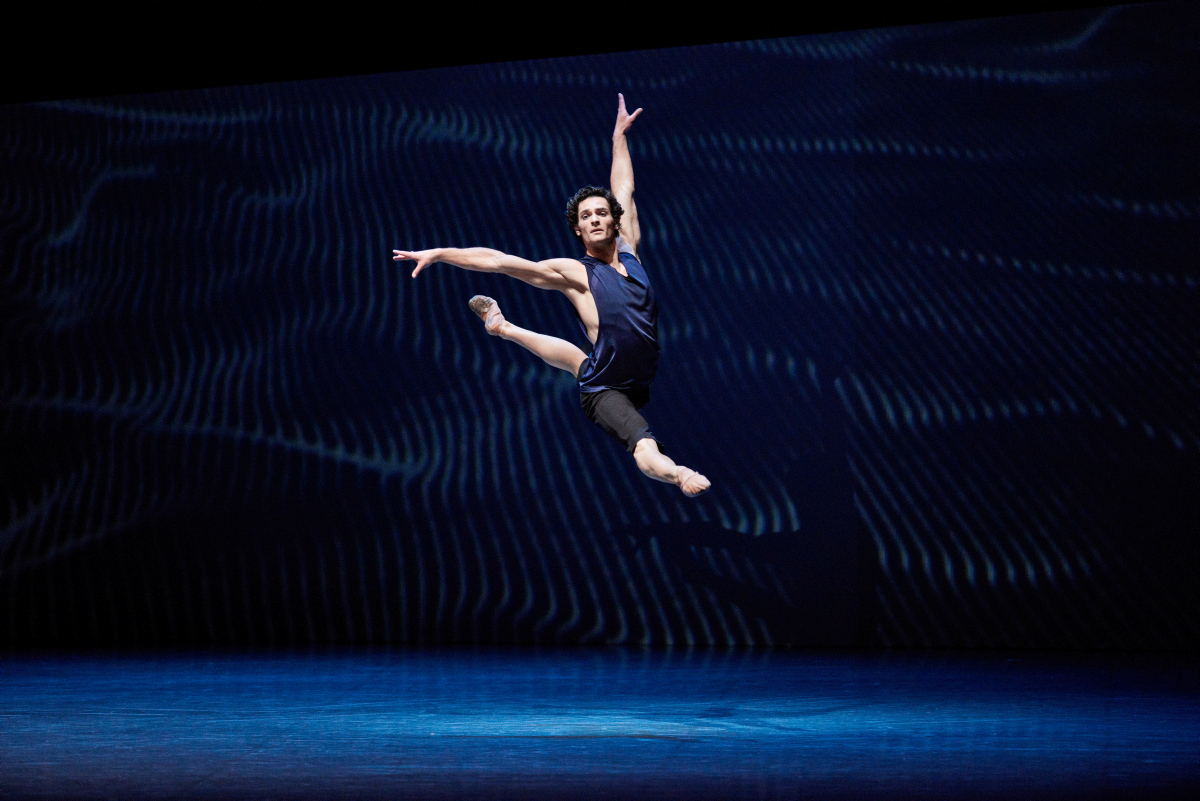 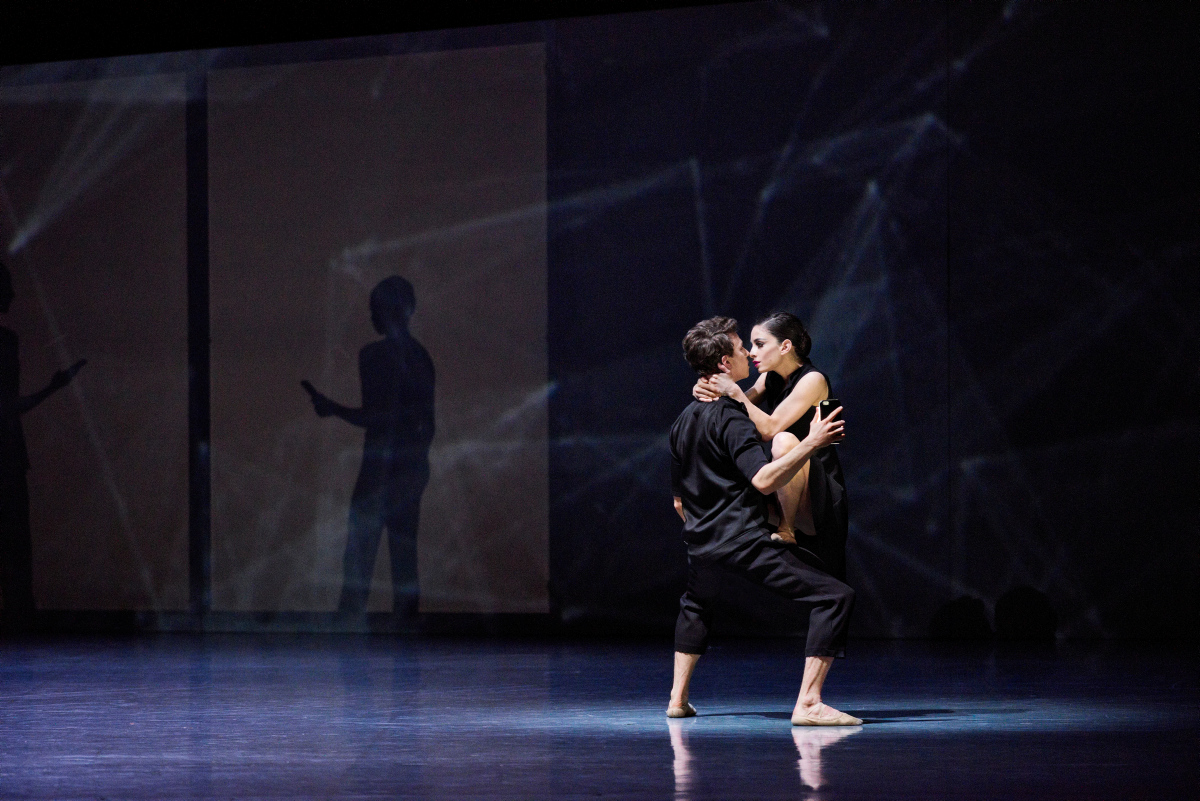 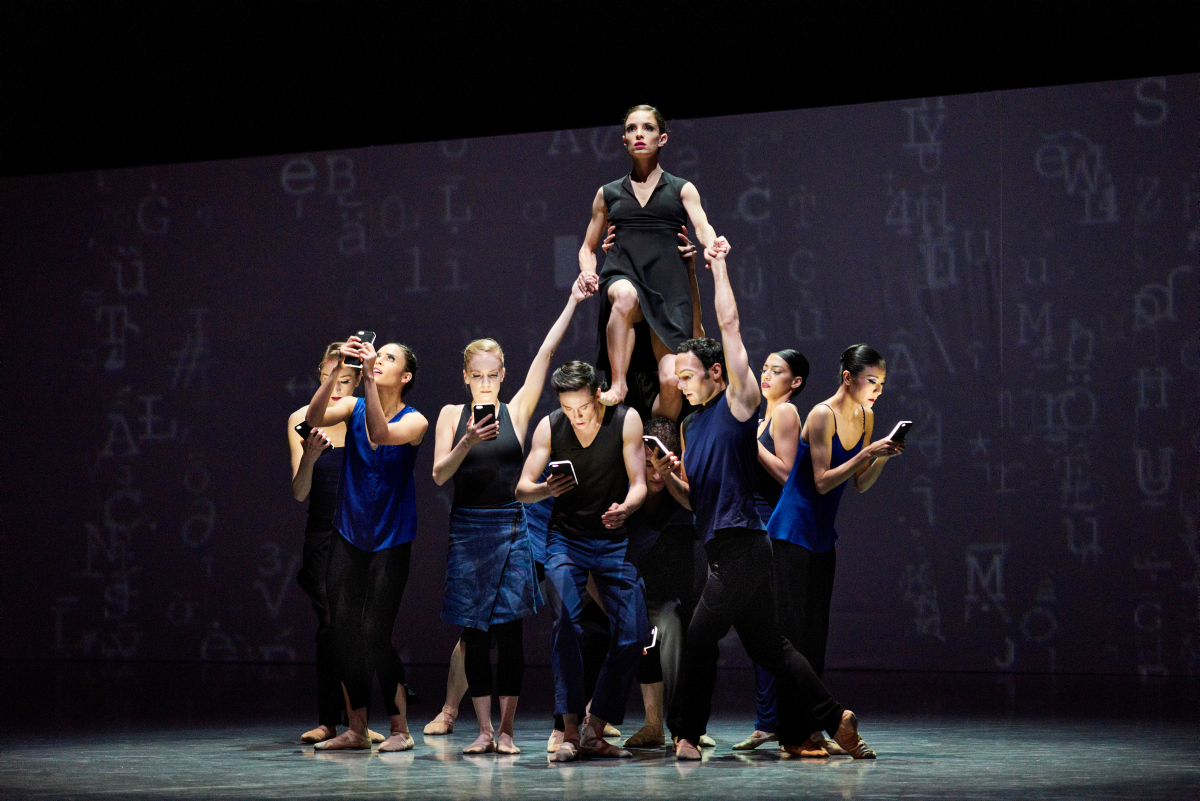 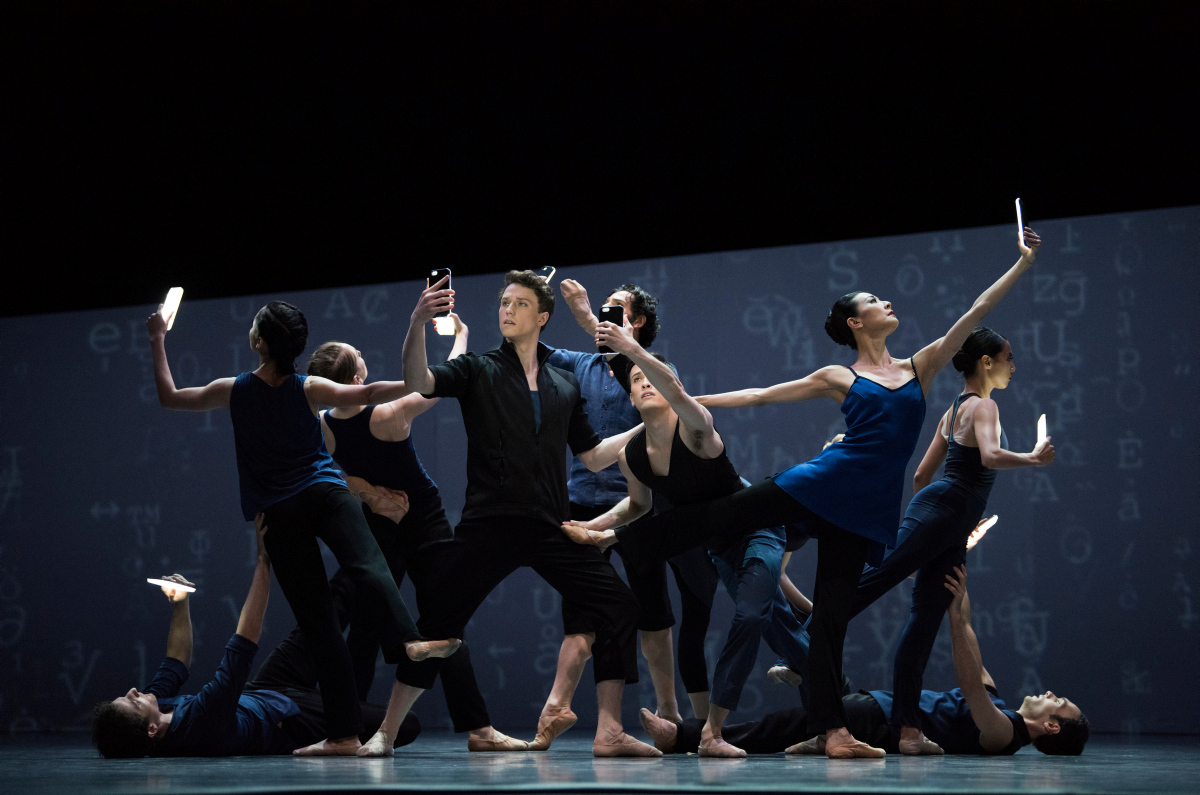 The phones come and go in Bound To©, giving the ballet something of a narrative at times; the rest of the time, they’re metaphorical. At first, the phones dominate. Later, right before a pas de deux made on Principal Dancers Yuan Yuan Tan and Carlo Di Lanno, one of the dancers snatches Tan’s phone from her hand. “It’s like when you leave your cell phone somewhere and you don’t have it for 24 hours, and you go, ‘Oh, I remember this.’ It’s kind of a relief, in a way,” says Wheeldon. In the pas de deux, the dancers reconnect, hardly separating, as if they need to touch each other in as many ways as possible. “It’s the idea of literal human connection, the need for the warmth of skin and not just the icy-cold blue of a screen,” Wheeldon says. In rehearsals, he tells Tan and Di Lanno to “keep the energy easy so it’s intimate and placed. It’s at its best when it’s contained. You represent how much of the natural beauty we miss when we’re texting—all the beauty that’s been created for us to enjoy.”

In contrast, a dance for four women is filled with embraces, dependence, the love and longing of friendship. “If there’s going to be a subtitle about this dance,” Wheeldon tells the women, “it would be ‘Remember when we used to talk?’” Choreographing a port de bras—arms lifting and opening, the back arching—which the dancers do twice in succession, he says, “The first one is a reminder, and the second one is a full conversation.”

Much of the movement in Bound To© features resistance, groundedness, or manipulation of the body (one’s own or others’), all of which seem to represent both the theme and a visual aesthetic. The women do not wear pointe shoes. “There’s something free about the movement of the shoe,” Wheeldon says, “of the toes on pointe, but”—he hesitates for fear of being overly literal—“[the ballet addresses] a bit of a heavy subject, so the idea of weight in movement makes sense. The pointe shoe is something very special and quite inhuman, in a way. You put a woman in a pointe shoe and her physicality changes. That’s one of the things that’s so appealing and beautiful about ballet—they’re like gods up there. And I didn’t want this to be about gods; I wanted it to be about people.”

And he wants it to be about people who reveal their struggles and their humanity. Rehearsing a solo with dancer Lonnie Weeks, who is hunched on the floor, Wheeldon asks for more vulnerability: “Make it more protected, not just the arm over the head.” Weeks pulls his legs in, deepens his posture. Later, Wheeldon wants more risk: “After you break and fall forward, can you be a little bit braver about where you put your foot?” As Weeks whirls through an insanely fast sequence of chaînés (a series of turns on two feet), Wheeldon calls, “It should be manic—you should be busting out about now.” Imagery helps the dancers pinpoint the feeling of a moment or step. When the other dancers hold Weeks upside down, his body arched, Wheeldon says, referring to Auguste Rodin’s sculpture, “It’s quite Gates of Hell.” To the quartet in a men’s dance, he says, “Make sure there’s a lot of breath through the body.”

Wheeldon’s people live in a world created by scenic and costume designer Jean-Marc Puissant, who has worked on many Wheeldon productions at The Royal Ballet and elsewhere. “He’s so willing to dare,” says the choreographer. “He doesn’t ever go for the obvious, and he often pushes me to work that way with him. It’s not always obvious to the audience what’s going into his work, and I enjoy that a lot. And I think for this piece it’ll be useful, because it marries two worlds. It opens with quite a literal statement about where we are and what we’re doing. By the same token, they’re dancing, so then it instantly becomes something a bit more poetic.”

As a choreographer, Wheeldon says he feels “like I’m in a constant state of evolution.” His work on Broadway and with contemporary companies like Ballet Boyz is part of that evolution, as is day-to-day life. “I’m very much a person who tries to live in the moment, so what I’m reading or listening to at this moment in time often ends up partly informing what I’m doing,” he says. “I saw the movie Detroit the other night, which was so hard to watch, but such a reflection, especially now, of the times we live in and the times we come from and how little we’ve learned.”

Enter the temptations and pressures of social media, inundating us with reminders of what Wheeldon calls this “very weird world we live in now.” Choreographing is, for him, a way to put his mind and energy into something productive. “One of the joys of being immersed in making a new work,” he says, “is that you really are immersed in it.”

By Cheryl A. Ossola

About Trey McIntyre's The Big Hunger