A Ballet of Emotions and Contrasts

George Balanchine’s Jewels is part of SF Ballet’s 2021 Season. It will be performed in Program 05, running March 25–31.

George Balanchine’s Jewels, created for New York City Ballet and widely performed by companies worldwide, is a choreographic triptych, a unique combination of styles and music that forms a contrasting, yet complementary, whole. Each segment of what dance critic Arlene Croce has called a “Balanchine primer” reveals a facet of the choreographer’s creativity and evokes a particular time and style of ballet. Seen together, the three mini-ballets produce an evening of dance that builds from the reverie of Emeralds through the jazzy dynamism of Rubies to the sense of the glory of imperial Russia that is Diamonds. Unlike most full-length ballets that tell a story, Jewels’ raison d’être consists of only one thing: dancing.

Jewels entered San Francisco Ballet’s repertory during the 2002 Repertory Season and reappeared the following year. Though the Company has danced both Rubies and Diamonds as stand-alone ballets, it has been 11 years since Jewels appeared in its entirety on the War Memorial Opera House stage.

Balanchine said that his gemstone-themed ballet with jeweled costumes was inspired, in part, by his introduction to jeweler Claude Arpels, whose collection of precious stones he admired. For a time it seemed that the trio of Emeralds, Rubies, and Diamonds might have become a quartet, but, as a triptych, is dynamic. (Balanchine considered including sapphires but decided against it because he thought the color too difficult to render onstage.) According to Balanchine repetiteur Elyse Borne, who along with Sandra Jennings, staged Jewels on San Francisco Ballet, the triptych “is like a nice meal. You’ve got your appetizer, you’ve got your main course, and you’ve got your big dessert at the end, which is Diamonds.”

Although Diamonds and Rubies are often performed as discrete ballets (Emeralds tends not to be), it is when these three gems are performed together that they leave their most dramatic impression. The unifying elements of Balanchine’s musicality, the simple backdrop-and-chandelier design for each segment, and the contrasting nationalism of their spirits work together to create a scintillating performance of complementary contrasts. Set to portions of Gabriel Fauré’s Pelléas et Mélisande and Shylock, Emeralds is French and Romantic; Rubies, set to Igor Stravinsky’s Capriccio for Piano and Orchestra, is American and fiery; and Diamonds, the grandest of the ballets, set to Symphony No. 3 in D Major, is pure Tchaikovsky: Russian and utterly classical.

“They were meant to be different; [Balanchine] gave each one its own personality,” says Borne. “To me they reflect the people that he made them for. Rubies wouldn’t have been the same without Edward Villella; Emeralds would not have been the same without Violette [Verdy] and Mimi [Paul].” And no one thinks of Diamonds without associating it with Suzanne Farrell and Jacques d’Amboise. “They really do look like those people,” adds Borne, “not that you have to imitate them. But I love showing videos of all of those people because that was the point of departure; that’s where it came from. You want to preserve the flavor as much as possible.” 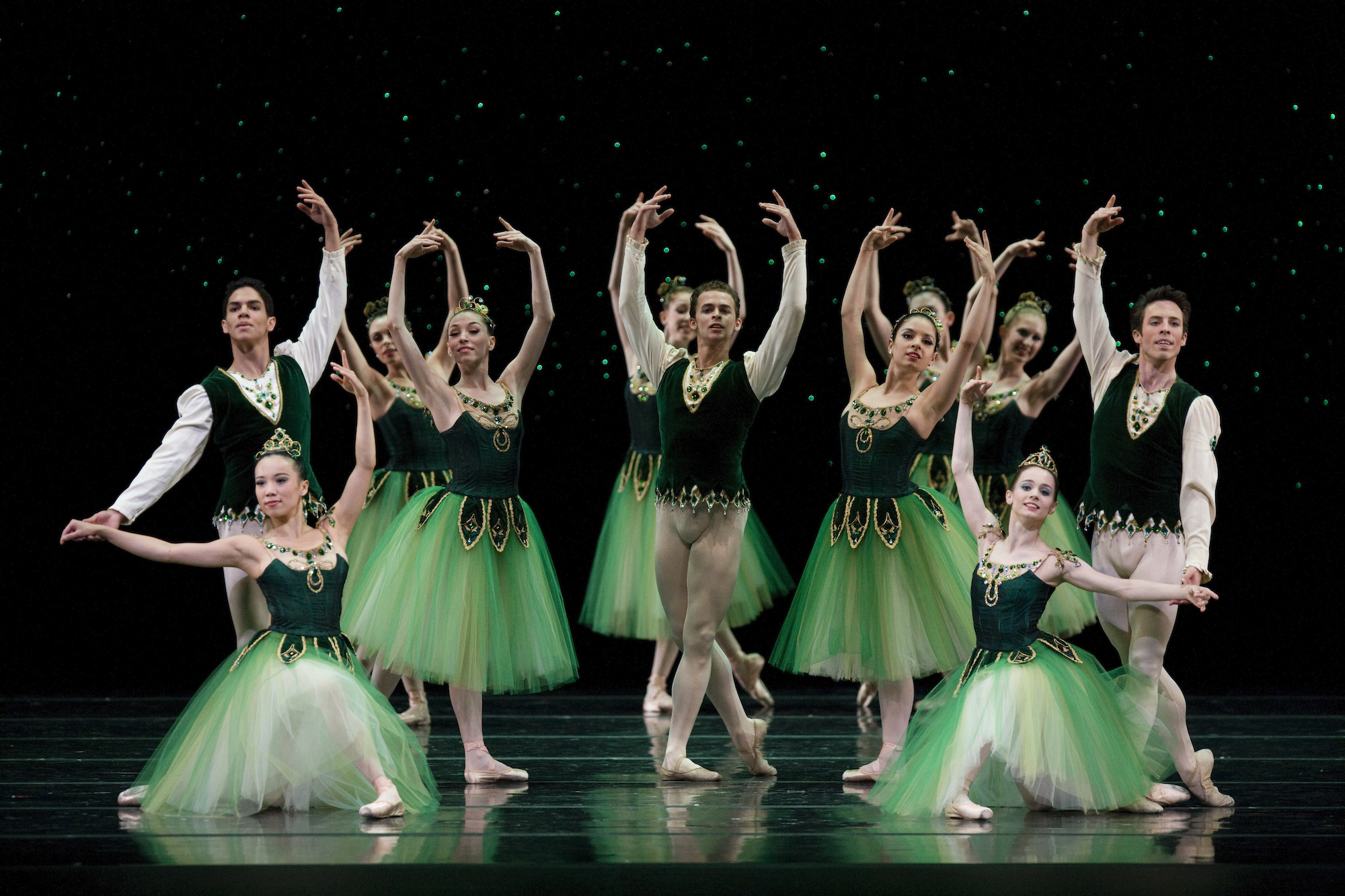 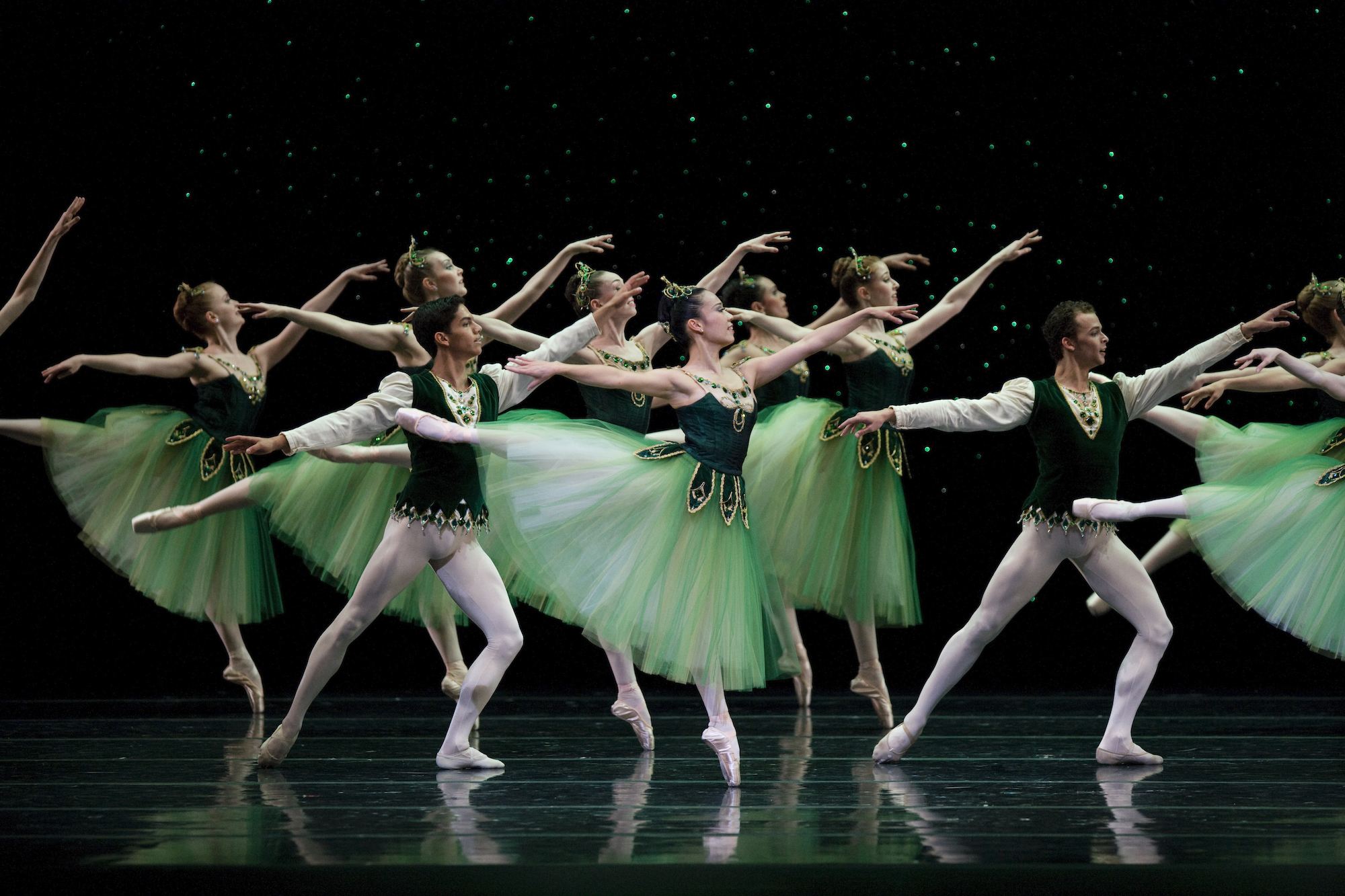 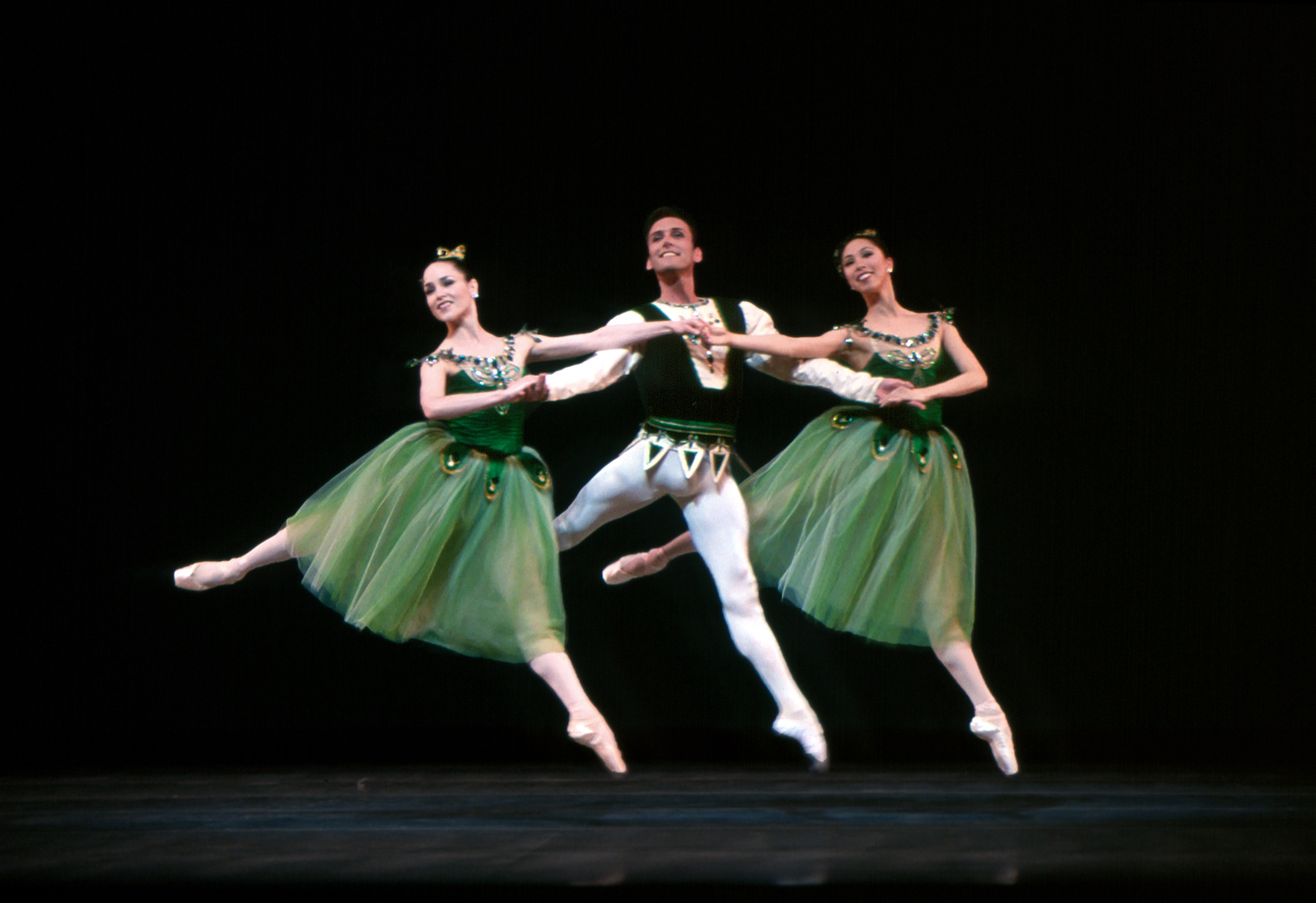 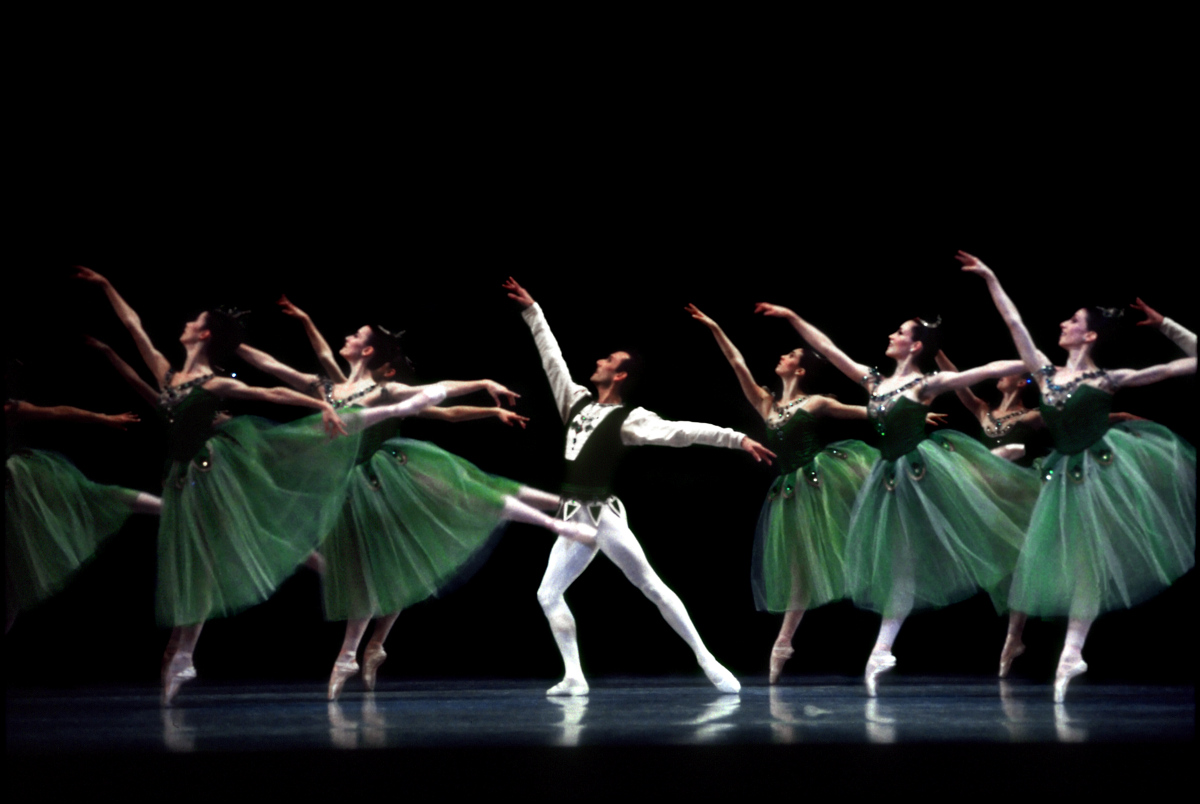 Emeralds literally unfolds as it begins, with a principal couple and a corps of 10 women onstage, and much of its beauty comes from its expressive port de bras. As it moves through two contrasting pas de deux, a buoyant trio, and lovely tableaux, its mood changes. A joyful beginning yields to an elegiac tone toward the end. “Later [in 1976] Balanchine added the extra pas de deux [to music from Shylock] and that very sad ending, [a pas de sept, to music from Pelléas et Mélisande],” says Borne. “It used to end on an up note and then he changed it.” The choreographer also revised the first pas de deux and the second ballerina’s variation.

For this soft, elegant ballet’s music, Balanchine chose one of the foremost French composers of the late 1880s, Gabriel Fauré (1845–1924), a composer, organist, and pianist known for his art songs. First a professor of composition at the Paris Conservatoire, Fauré was named its director in 1905, where he served for 15 years. His incidental music for Shylock, a play by Edmond Haraucourt, premiered in 1889; a year later, he adapted it for the concert stage in the form of a symphonic suite. In 1898, he composed the music for a production of Maurice Maeterlinck’s 1893 play Pelléas et Mélisande at the Prince of Wales Theatre in London, stepping in for Claude Debussy, who turned down the opportunity. Emeralds shows us a side of Balanchine that we, perhaps unfairly, don’t typically associate with him, one that’s softer and drenched in feelings of reminiscence. And rarely did he put his women in Romantic tutus. “People always say that Emeralds is so quiet, and it’s meant to be like that,” says Borne. “It works in the context. You have to start somewhere—if the whole evening were smash and splash, there’d be nowhere to go.”

Of the three ballets, Rubies is the most contemporary, with music that makes it a dissonant, edgy counterpoint to Emeralds and Diamonds. For the score, Balanchine turned to his longtime collaborator, Russian composer Igor Stravinsky (1881–1971), who first made his mark on the ballet world with his compositions for Serge Diaghilev’s Ballets Russes. Stravinsky wrote Capriccio for Piano and Orchestra in 1929, during a period in which he was performing widely as a concert pianist, and revised it 20 years later. 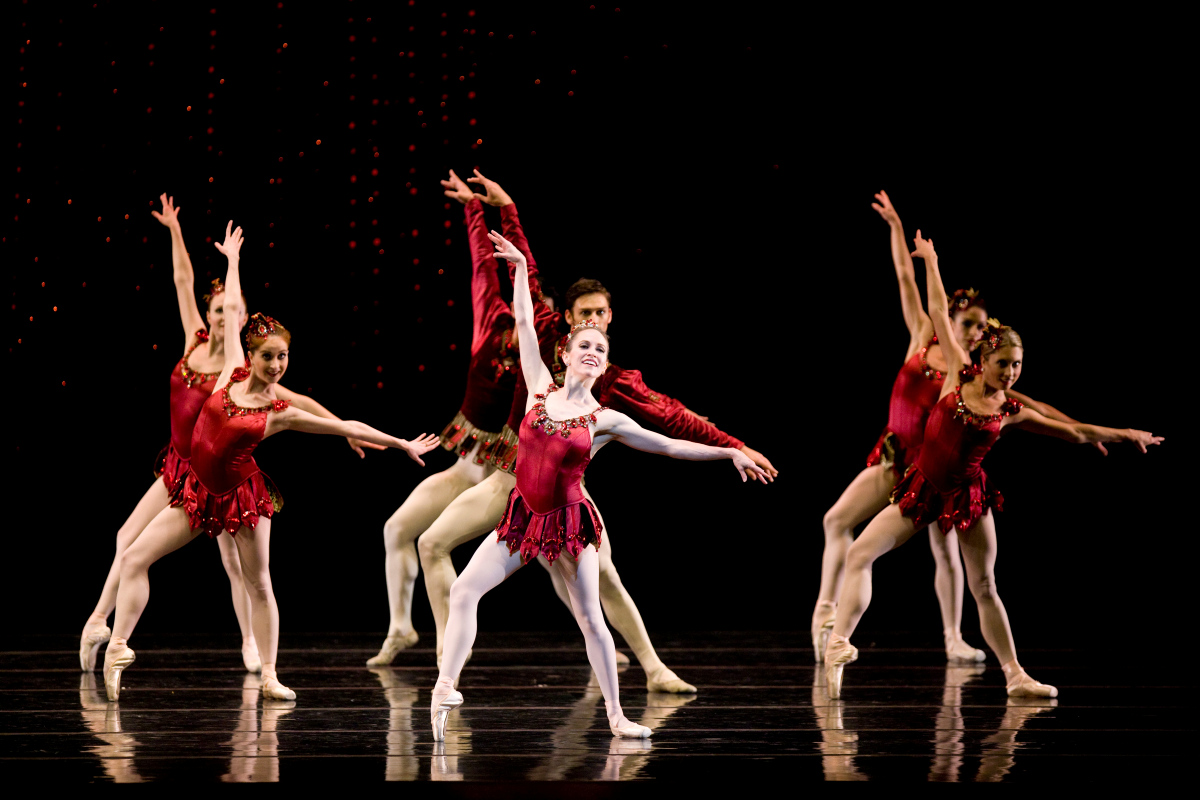 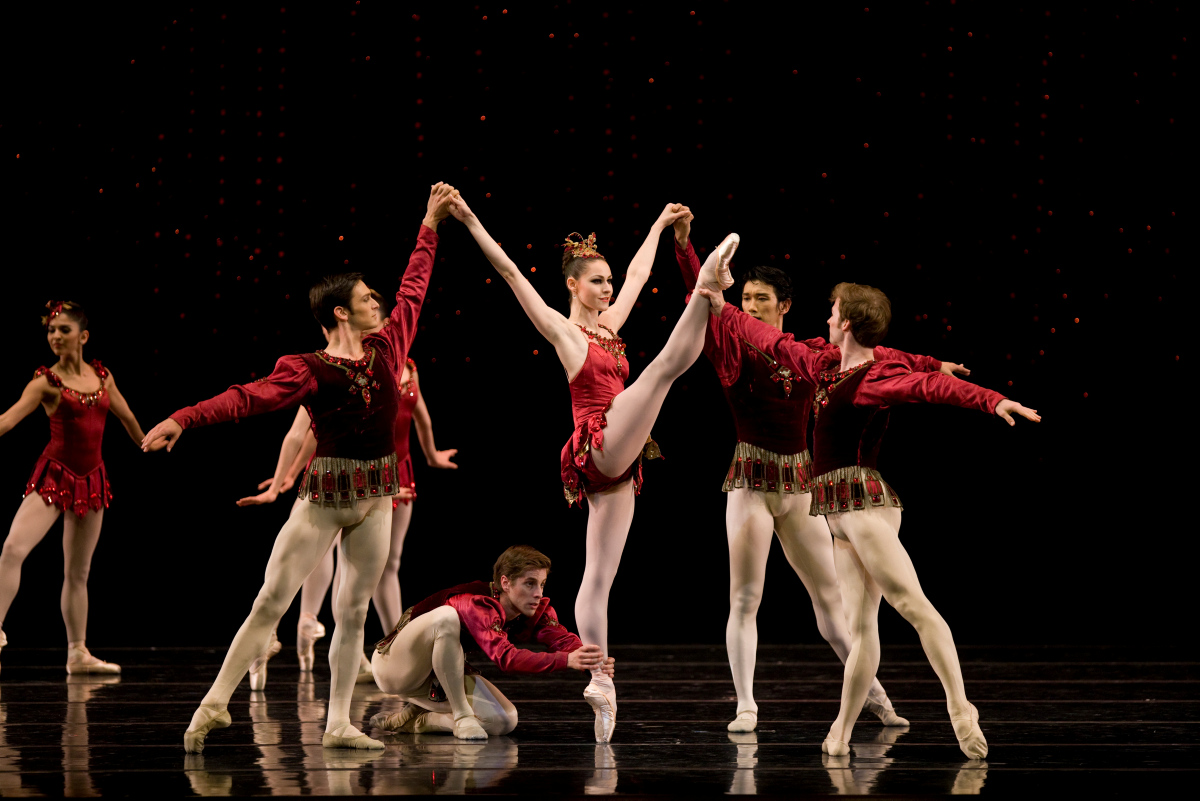 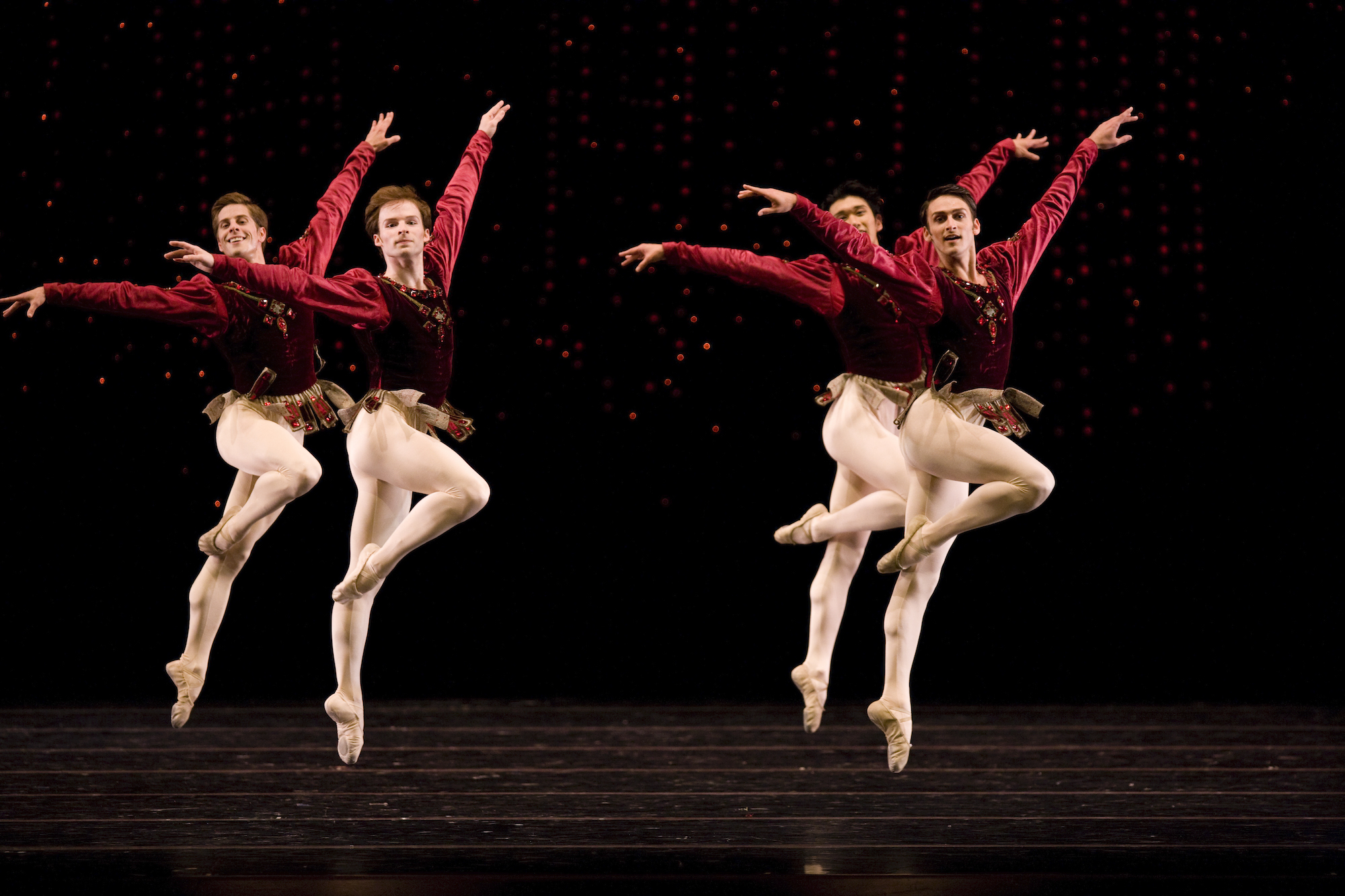 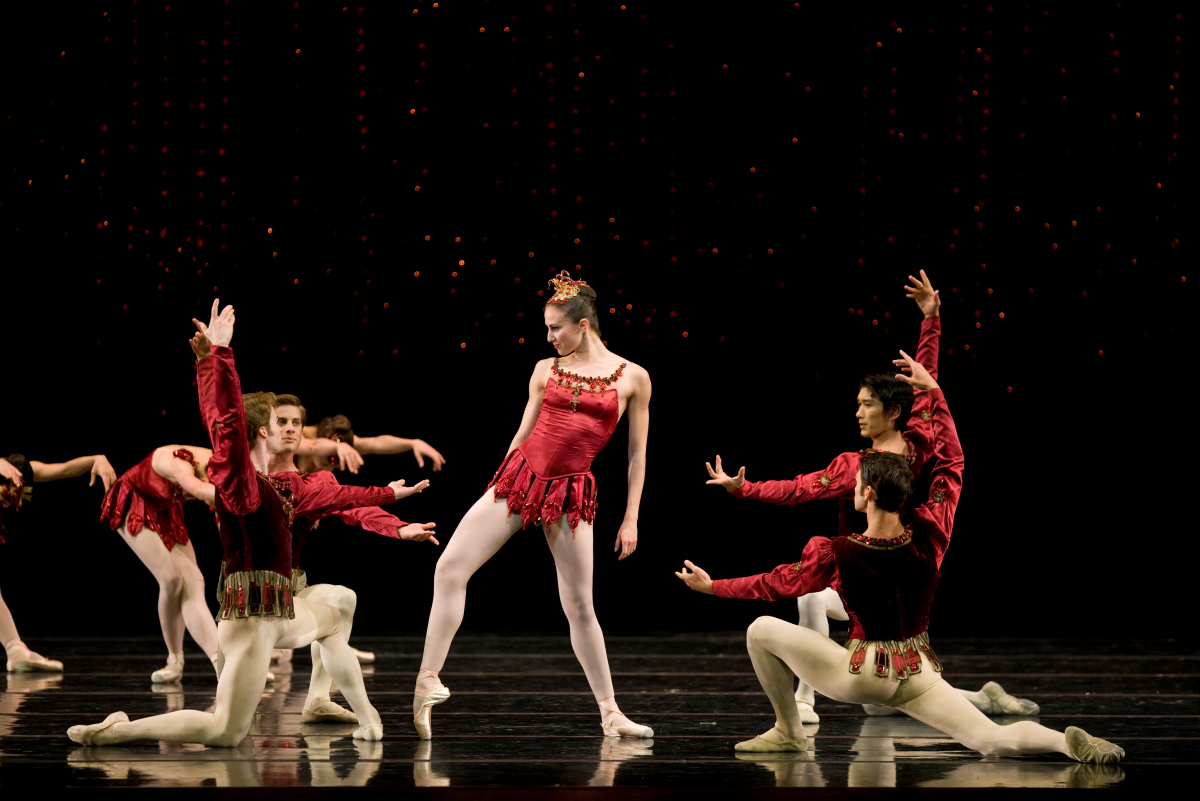 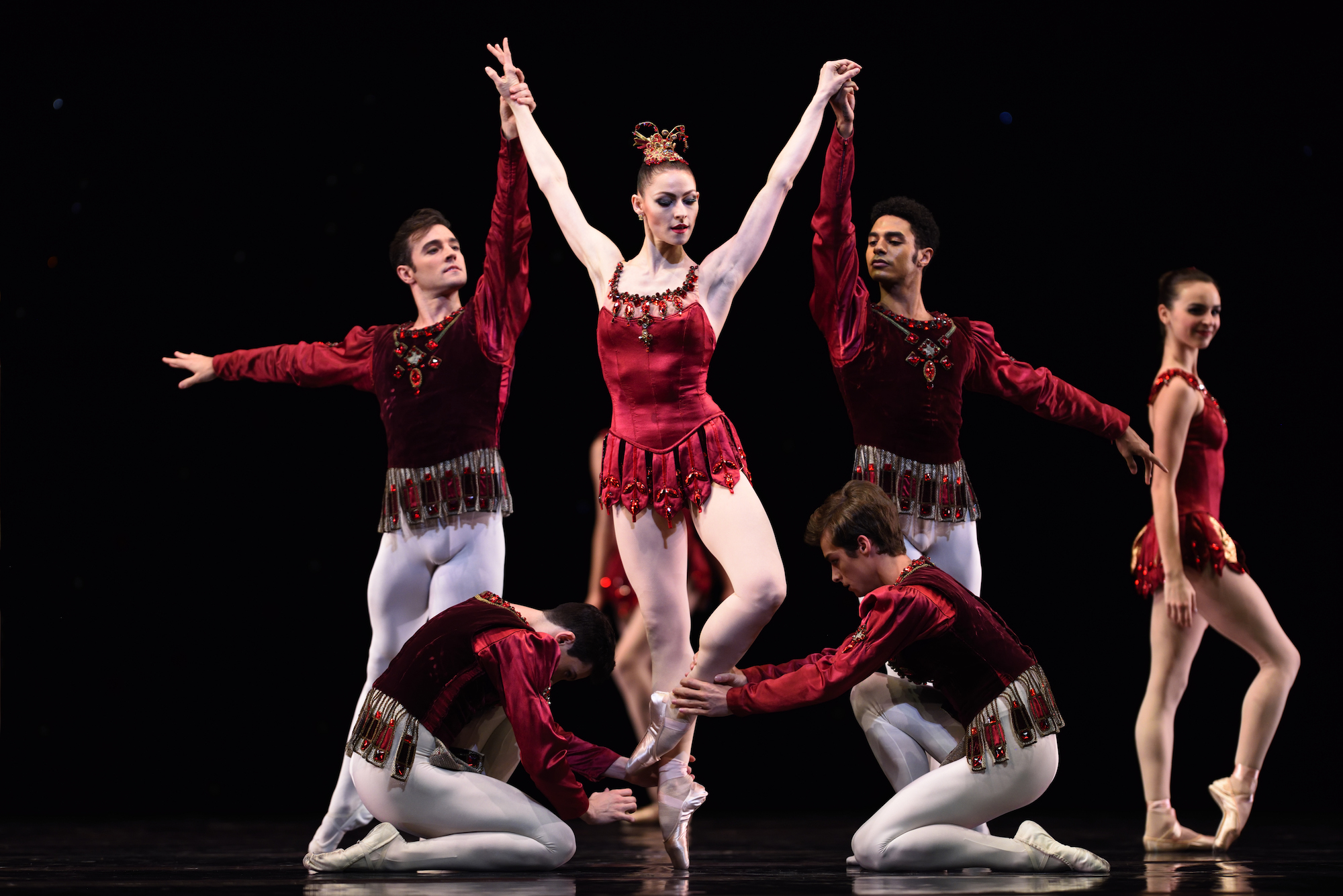 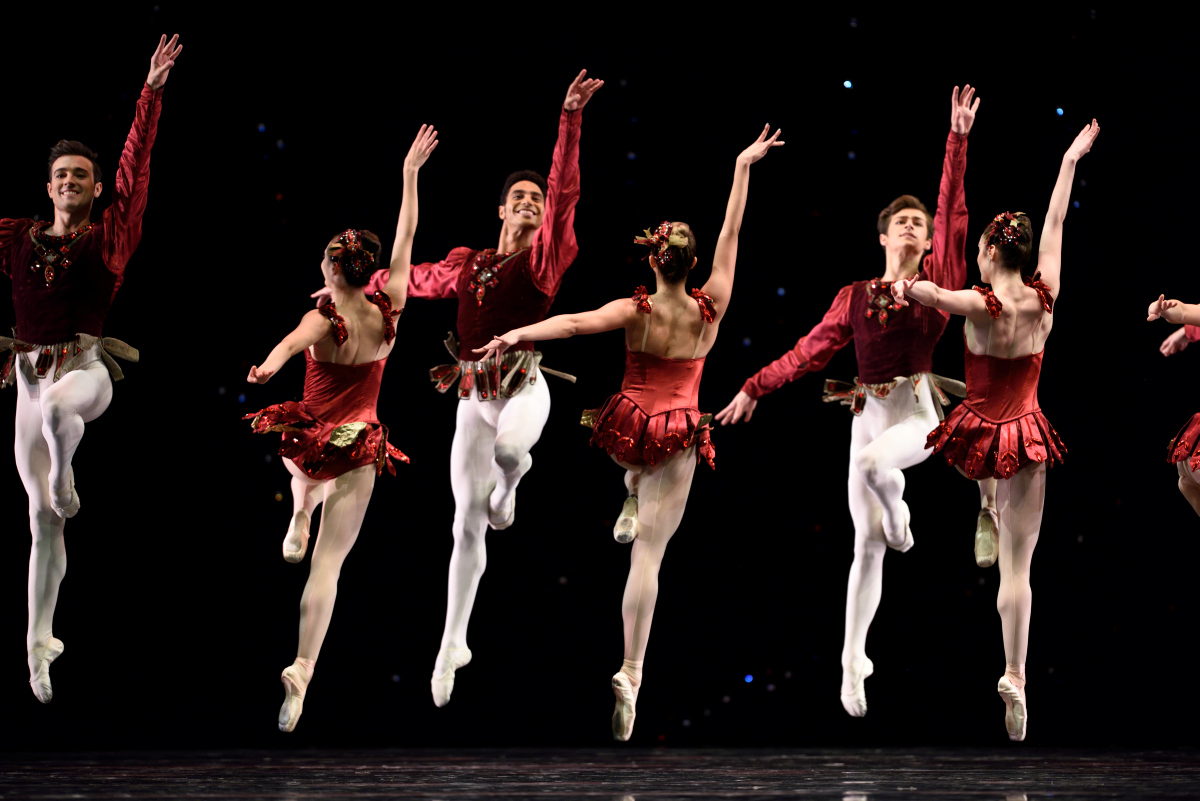 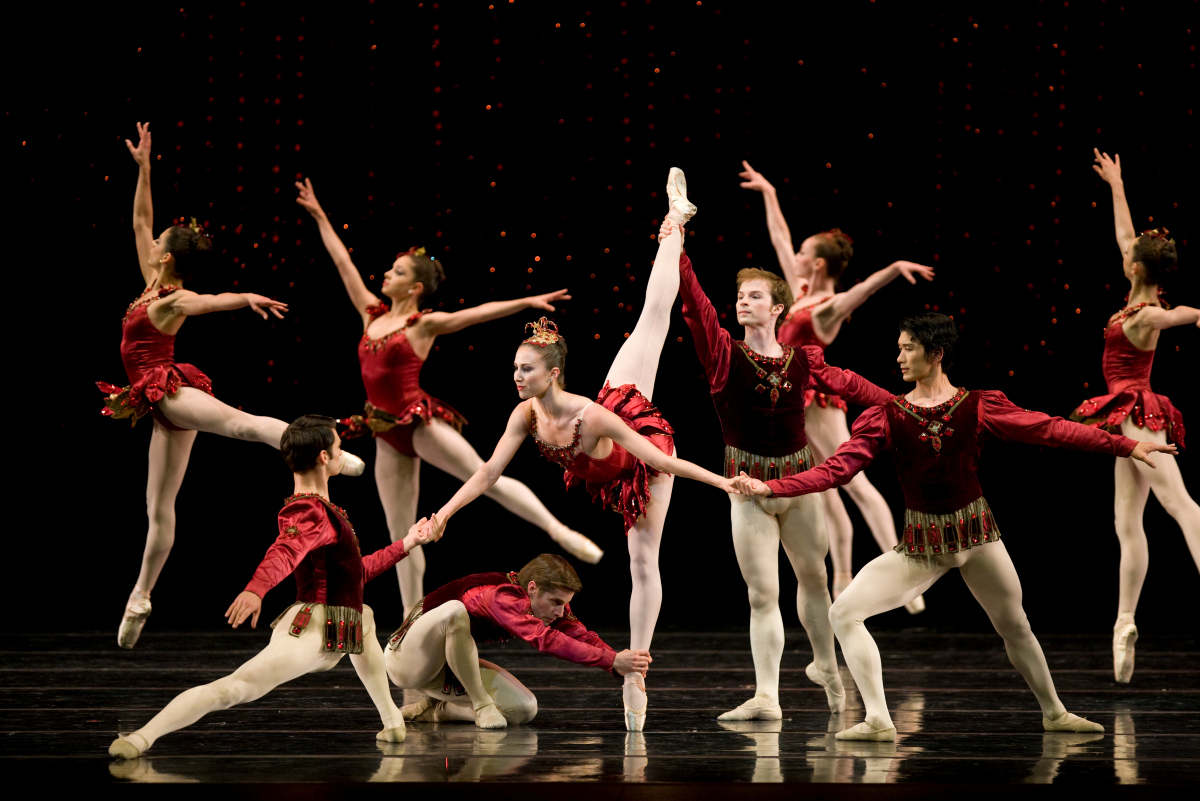 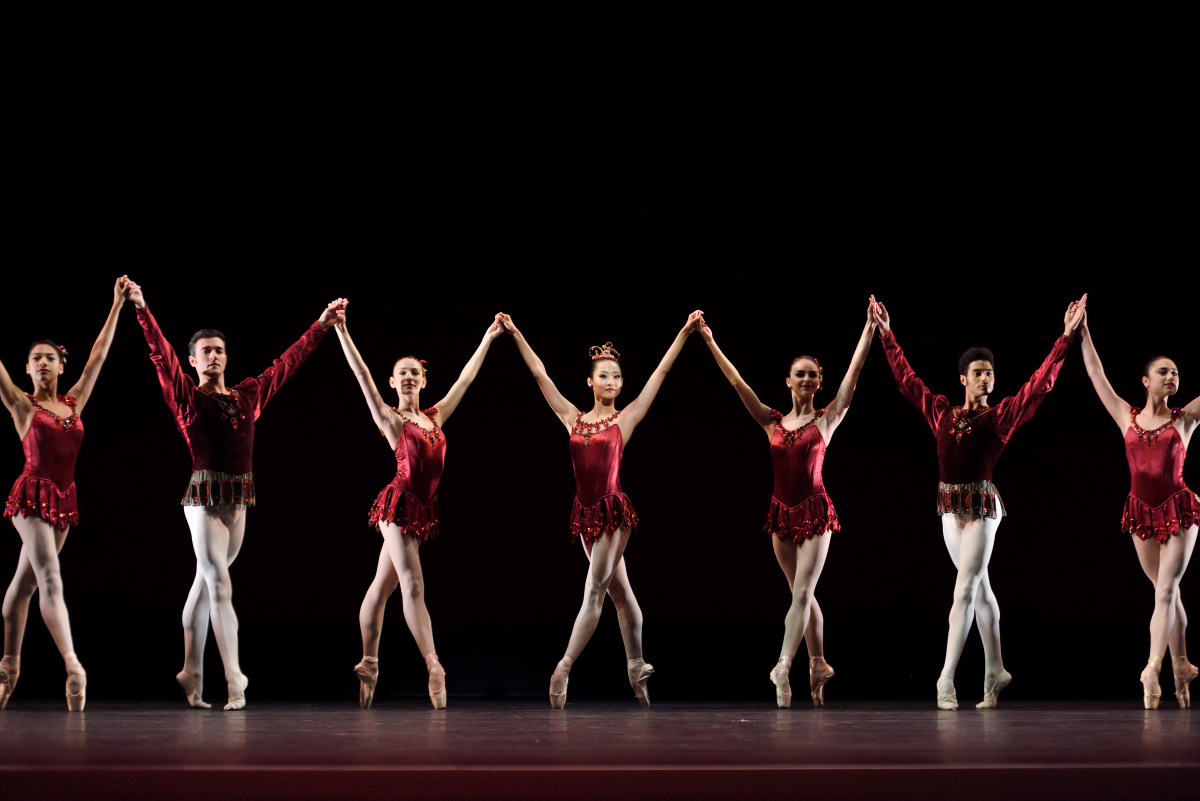 Fueled by Stravinsky, Rubies is flashy, sexy, and fun. San Francisco Ballet first performed it in 1987, long before the Company danced the full-length Jewels. When she stages Rubies as a stand-alone ballet, Sandra Jennings, a former New York City Ballet dancer who sets works for The Balanchine Trust, approaches it with several priorities in mind. “I work on the counts and the style, which is very sophisticated, jazzy, witty,” she said, when she set the ballet on the Company in 2006. “I also talk to the corps about having a sense of community, especially in the third movement. The corps women have a lot of movements they do together, and if they do the whole thing to the audience it doesn’t make sense. Mr. B [Balanchine] used to tell us, ‘My dear, look at your neighbor.’ So I talk to them a lot about that. It also helps with the spacing.”

Spacing is also important when you’re the tall woman, whom Jennings describes as the master of ceremonies. “We talk about spacing because [she] comes down the center in the beginning of the ballet, and she worries that she’s going to get too far downstage. We work on some of the footwork to get her back upstage so she can take big steps, because if she has no room she has to take little steps and then it looks very different. Her legs should be like daggers in the floor. Pow! We talk about how she should dance big but also have the contrast of something sharp and something soft.”

Jennings danced in Rubies “unofficially,” she says. “I was what was known as a swing girl; I did many parts. I was never officially in it, but I never missed a performance.” She remembers the choreographer’s precise finessing of every detail in rehearsals. “Balanchine taught us certain ways to approach each step, a very specific way of doing it. And if it’s done the right way, the step looks really different,” she says. “He would take a step and break it down for us, and that made it important to us— and when all these little steps become important they give the ballet a different look.”

The brilliant reds of Rubies give way to the purity of white tutus and rhinestones in Diamonds, which glitters with the power of a large corps de ballet and eight demi-soloists backing a principal couple. If you’ve ever tried to imagine what ballet was like in imperial Russia, you need look no further than Diamonds. Yet its impact and power are derived from its softness. Diamonds is elegant in an understated way, with fleeting nods to Russian folk dance and ballet’s origins as a court dance, emphasized by heavy drapes masking wings and crystal chandeliers that sparkle against a blue background.

Unlike the angularity often seen in Balanchine’s neoclassical ballets, Diamonds has floaty, sometimes swanlike port de bras and extensions that unfold as if there’s all the time in the world. The principal ballerina prances delicately on pointe, moving through passé with airy speed. Many of the jumps are small, quick, and light, but even when they soar higher, as the principal male does in the scherzo, the landings are soft and fluid. The pas de deux is a gentle, shared exchange rather than a fiery contest of virtuoso variations with a “can you top this?” coda. According to Suzanne Farrell in her description of the pas de deux in her book Holding On to the Air, “It is a dance full of the paradoxical tensions between a man and a woman, but its beauty lies, not in rivalry, but in submission. Diamonds is about the majesty of service and the glory of humility.” We see that enacted at the end of the pas de deux, when the man kneels to kiss his ballerina’s hand. 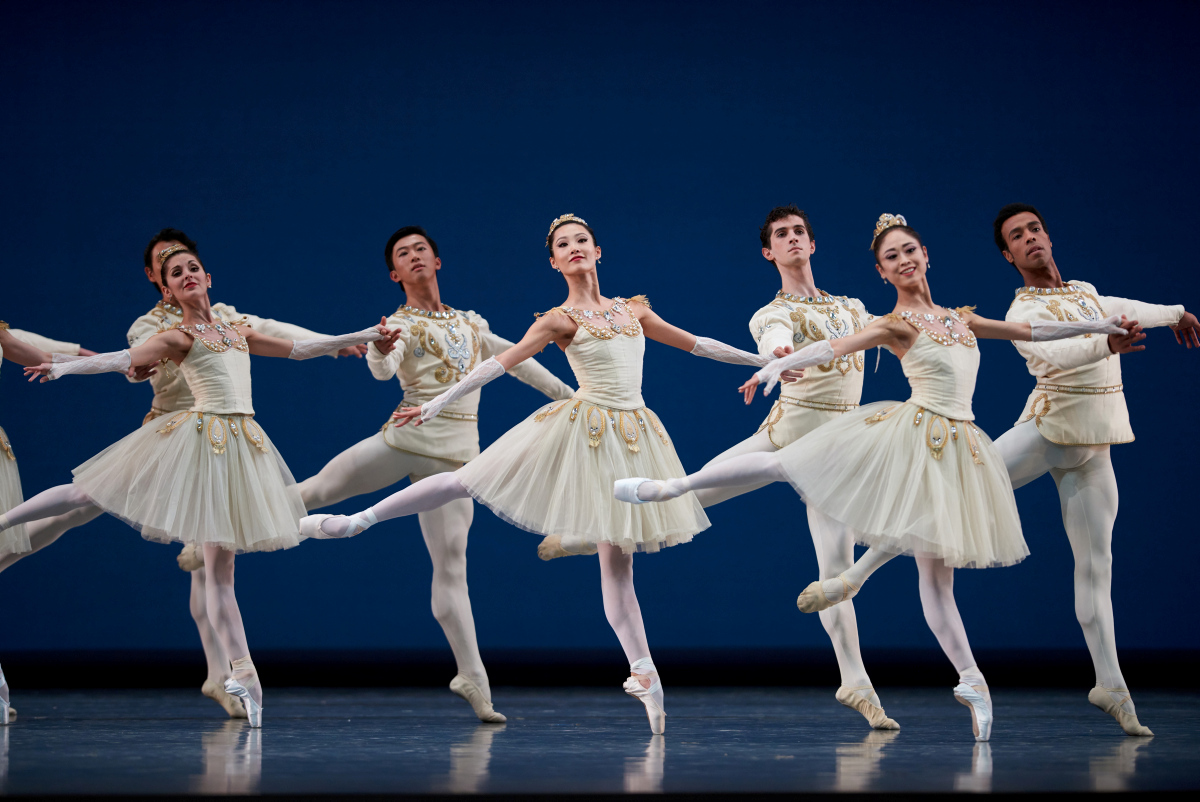 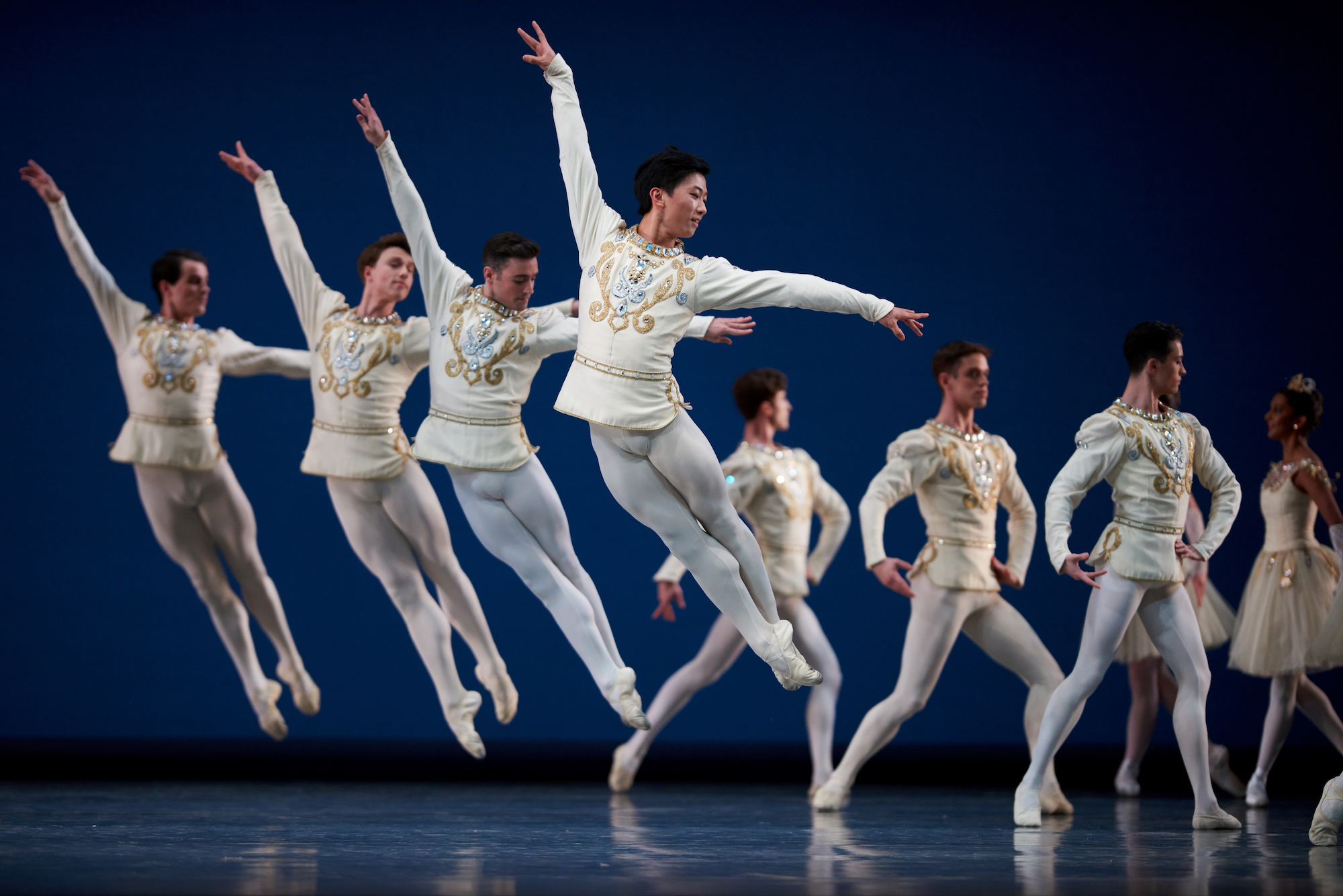 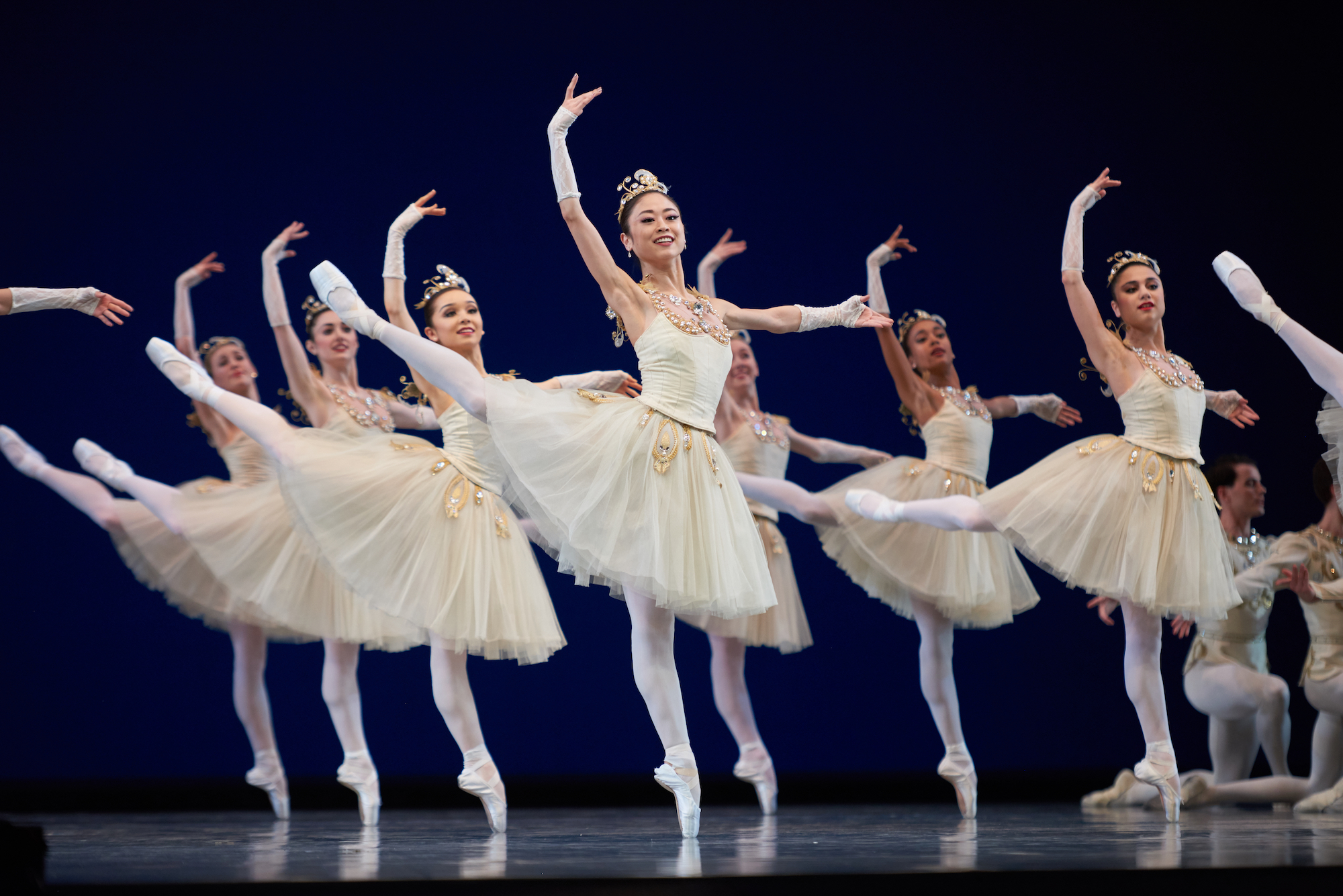 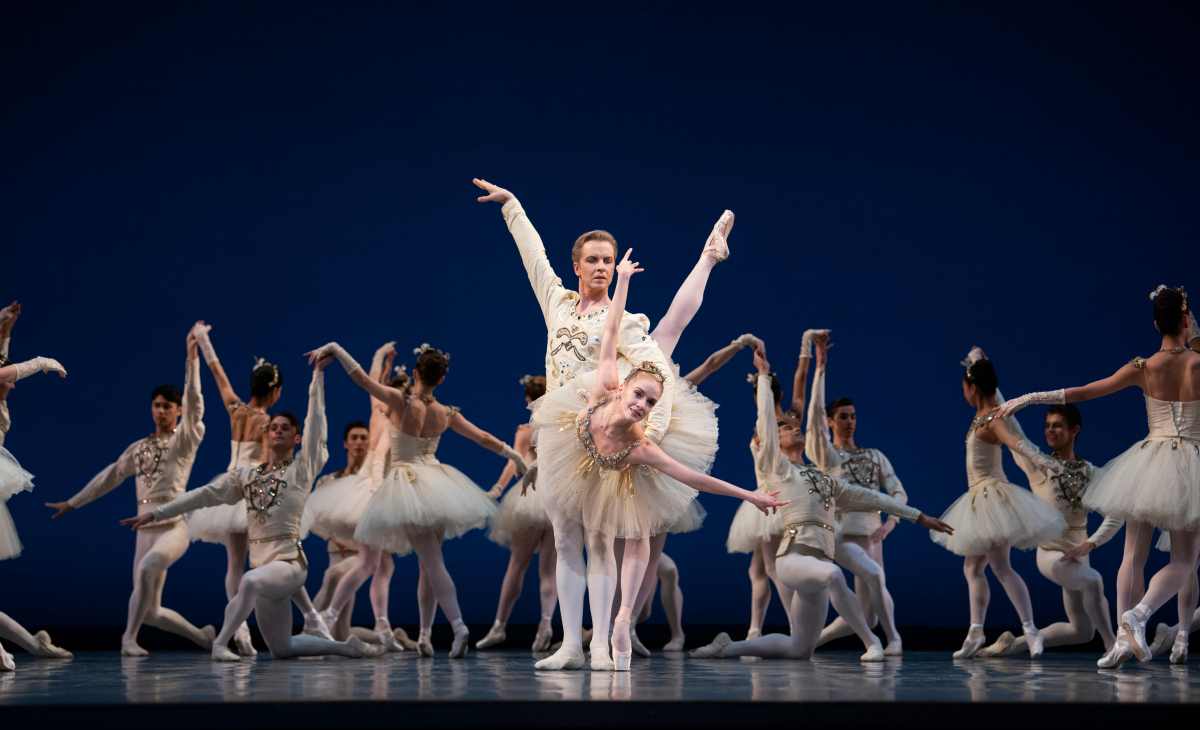 Tchaikovsky (1840–1893) wrote his third symphony in only a few months during the summer of 1875. As he did in the finale of his second symphony, he develops a theme by continually changing its background, perhaps incorporating a technique used by Mikhail Glinka into his own. The composition begins with a measured pace which builds to an allegro section. Then a haunting theme begins the slow pas de deux. The tempo picks up with the scherzo and then, in the finale, the music becomes more expansive as it moves into a polonaise, a dignified court dance that was introduced in Russia in the late 18th century.

Farrell wrote, “There is very little in the way of excitement and glamour that can equal Balanchine and Tchaikovsky in a polonaise.” With the full ensemble moving with precision, their upper bodies upright and formal, the pageantry transports us to that long-ago Russian court. At the end, the principal couple slowly promenades, framed by the corps in ever-changing formations—a moment, Farrell writes, that made she and Jacques d’Amboise feel like “the central stone in a mammoth setting . . . one of Balanchine’s choreographic jewels.”

Jewels is unique in the ballet lexicon, a dance of emotions and contrasts, and it remains one of Balanchine’s best-loved works. Lasting “just two hours and five minutes,” says Borne, “it’s very full—there are a lot of steps in those two hours!”

by Cheryl A. Ossola